YaY – All-Access tickets* for Rabbit Heart Poetry Film Festival 2017 are now available! You can score yours today at the Doublebunny Press Store.

*Tickets for single shows will be up on Tuesday <6 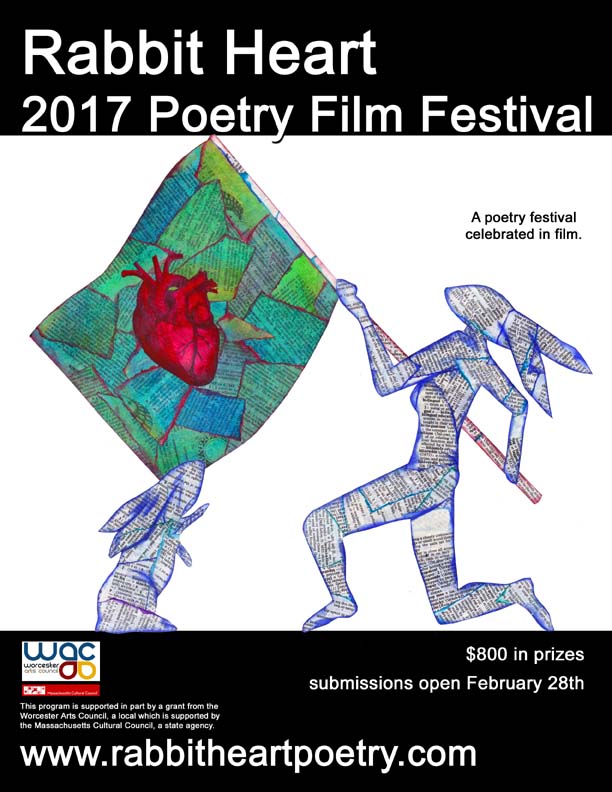 Once again, we’re planning to be at the lovely Nick’s in October – on the 21st there will be a matinee in the afternoon, and in the evening, a gala awards ceremony & viewing party \o/

It’s on, y’all! Tickets for Rabbit Heart Poety Film Festival 2016 are now available! You can pick yours up today at the Doublebunny Press Store.

Looking forward to sharing poetry movies and popcorn with you at Nick’s on the evening of Saturday, October 22nd!

Save the date – Rabbit Heart Poetry Film Festival will be at Nick’s again this year, on Saturday, October 22nd!

Standard
Rabbit Heart Poetry Film Festival is back again this year – AND WITH TWO DAYS, even! We’re returning to Nick’s Worcester on Columbus Day weekend to get our swank poetry on! Hope to see you there =D
Tickets are now on sale for the Showcase Matinee and Kickoff on Saturday, October 11th, and for the gala Awards Ceremony and Viewing Party, and you can get them right here.

Last year was Amazing – so much great work on the stage, and trophies and popcorn and fancy dresses, and Tony Brown and Melissa Mitchell emceeing and and AND – omigod, come join us again this year – it was a BLAST!
Standard

Unbelieveable – we’ve made it a whole season of slams at the Sahara, and now it’s time for finals! On Sunday, Colin Killick, Rushelle Frazier, Ava Molnar, Sarah Sapienza, Robert Blackwell Gibbs , Jenith Charpentier, Ashley Wonder, and Nicole Zajon will square off to see who’s on the 2015  Worcester Slam Team. See you there!

You know about the new show in town? Staffed by veterans of the Asylum, the Dirty Gerund, MassLEAP, and Ballard Street Poetry Journal, among others, come to Sahara on the first Sunday of every month for a spectacular open mic, feature, and slam. Doors at 7, show at 7:30.  More info at their website, here.

Movies have been made and submitted, judging has been completed, a delicious venue has been secured (Nick’s Bar – with the fancy fancy red curtains!) and the night of October 12th picked out – and now it’s that time. TICKETS ARE NOW ON SALE for the very first Rabbit Heart Poetry Film Festival Viewing Party and Awards Ceremony. I’m pleased as punch to report that emceeing that night will be handled by my favorite duo, Tony Brown and Melissa Mitchell!
You can order your tickets from the Doublebunny Press store, right here.

OK! So it’s been a little while, and I wanted to check back in – everyone’s making their movies, right? You know about the Rabbit Heart Poetry Film Festival, yes?

Well, there have been some osm new developments for RHPFF, and I totally want to tell you all about them – check this stuff out:

♦First of all, submissions are now FREE! There is no longer an entry fee associated with submissions to the festival – yessiree, Bob, you can now submit your poem film to the festival for the mere price of postage. So much win \o/ Thank you to everyone who contributed to the Go Fund Me campaign* – we raised almost $600 last month, and covered pretty much all of the prize money. This baby is free now – please take advantage of that delicious little fact.

♦Secondly, do you know about the Venue Challenge? The venue that submits the most poem films (or you can call them videos, of course), with a minimum of five submissions, gets one of the awards named in its honor. So at the awards ceremony and viewing party this autumn, we might be announcing The Boston Cantab Award for Best Animation. Or the Slam Free Or Die I Shot It Phone Award. Or the Louder Arts Award for Best Music or Sound. How about the Busboys and Poets Best Valentine? The winning venue gets to pick the prize they want to call their own. Think about it – how cool would it be if your venue could claim that kind of bragging right? (And also a full page ad in the program!) And, because you were wondering, yes, you can totally rep the Poets’ Asylum – do it!

♦And perhaps the coolest news on the radar is the addition of the Shoots! Youth Prize. Through the contributions of an anonymous donor, RHPFF was able to set up this prize for poets and filmmakers 17 and under. It will be its own $100 prize category, and all submissions to Shoots! will also be qualified for the other prizes..

Which means that now, in addition to the $200 prize for Best Overall Picture, RHPFF will be awarding  $100 prizes in categories for Best Animation, Best Music in a Video, Best Smartphone Production, Under 1 Minute, and Valentine and the Shoots! Prize!

Are you stoked now? I’m so stoked! Time to make some movies! (Rules recap beneath the fold.)

END_OF_DOCUMENT_TOKEN_TO_BE_REPLACED

Ok, so we talked about New Incarnations! About Bold Next Moves! About Cool Projects! Right?

This film festival is about bringing together poetry and the visual arts at the intersection of film. Anyone can make a video of a poet reading a poem, but that’s not what Rabbit Heart is looking for. What we’re looking for is what you can do visually with a poem, without showing performance. Use the poem as your soundtrack, add sound effects and music if you’d like, and let that be your springboard for what happens visually – show, don’t tell, and do it up hella good.

More information and links to the submission page right here.